Based in a delightful rural setting, yet just minutes from the M4 and M40 motorways and Heathrow Airport, Runnymede Motor Company has a long and proud record of handling interesting motorcars for all manner of clients. Typical customers range from those setting out on the classic road with a standard DB7, to serious collectors seeking such relative rarities as an Aston Martin V8 Vantage, Ferrari 550 Maranello or Porsche 911RS. Since its foundation over 40 years ago in 1978, Runnymede Motor Company has so far found new homes for some 4,500 motorcars, around 1,500 of which have been Aston Martins. We are regular supporters of the major classic car shows at home and abroad, and just as likely to be found at Techno Classica in Essen as Birmingham’s NEC – keep an eye open for us and don’t hesitate to come and say hello.

Martin trained as a chartered surveyor but, like most of us born with petrol in our veins, soon gave in to the lure of the motorcar and has remained in the classic motor trade ever since, establishing Runnymede Motor Company in 1978. A firm supporter of the Aston Martin Owners Club and its events, he has also successfully raced a number of AM products over the years - most notably the ex-Peter Foden DB5 and a superb evocation of Project DP214.

Malcolm initially worked in the print industry after leaving school, but was another to feel there was more enjoyment to be had from life in the fast lane. Following a spell selling Jaguars for Henlys, he joined Martin at Runnymede Motor Company and is still with us over 35 years later. 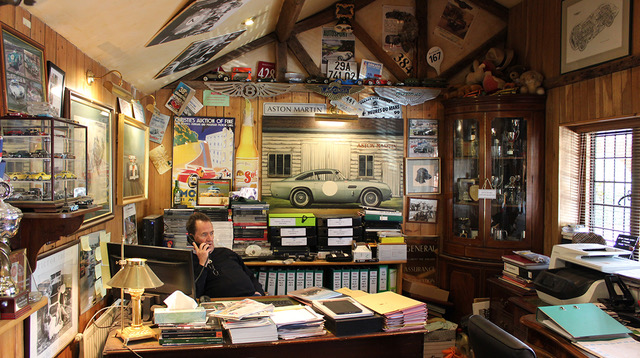